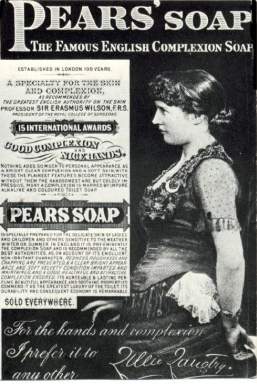 In America as in Europe Lillie had many suitors the most prominent of these was Freddie Gebhard a rich industrialist from New York City who showered Lillie with gifts including a Pullman Railway carriage named "Lalee" worth over half a million pounds.

His father and grandfather were merchants and importers in New York City and his mother’s family were involved in real estate in New York and New Jersey. Although, he had no “real job”, Freddie bred and raced thoroughbreds before he met Lillie Langtry and was well known in horse racing circles. He also bought, bred and raced steeplechasers. After he and Lillie Langtry parted ways, he married Louise Hollingsworth Morris, who was a Baltimore “belle”

Lillie started up a winery and produced wine bottles with her image on the label she also decided to breed horses.

She had a similar effect on American society as she had in England and became very fond of this huge continent.
She endorsed products, set up a diverse range of companies, and became a millionaires in her own right.