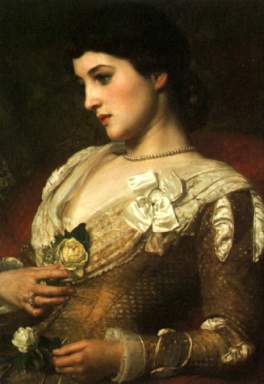 A Deans daughter, a sister to six brothers, a wife to a wealthy merchant, an acknowledged beauty, a society A-List guest an artists model, mistress to a future king, inspirer of poetry and plays, society hostess.

Lillie Langtry went from wearing only one dress to being acknowledged leader of fashion, from being socially inept to societies "must have" and when she lost favour and was nearly bankrupt she re-invented herself as an actress and entrepreneur.

She made advertising socially acceptable, toured America with her own acting company, started a winery in America and was a successful owner of race horses. She amassed millions and spent with equal extravagance, the centre of attention wherever she went. Intelligent humorous, fascinating to both men and women she was admired and idolised by people from all walks of life.

At home in the company of Princes and Presidents, artists and poets or simply alone in her garden. Envied, respected adored and lampooned, her fame spanning over half a century.

Throughout her life she left a trail of broken hearts.

A controversial figure who challenged Victorian society's attitudes to women, but was no suffragette.

A unique individual who was years ahead of her time.