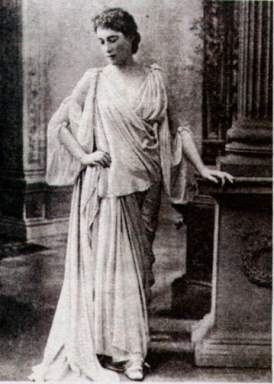 It was made discreetly clear to those inviting the Prince to any social occasion that it would be sensible to invite Mrs Langtry also, otherwise he would be extremely unlikely to attend.

The Prince was no longer interested in any other women and acknowledged her as his official mistress, driving with her in an open horse drawn carriage and promenading with her in public at high profile sporting and social events such as Goodwood, Ascot, Cowes Week, the Henley regatta and the theatre.

Unlike today the British press were unlikely to create a royal scandal and even the cartoonists of the day were mindful to tread carefully as their work would not be printed or their services might no longer be required if the proprietors of their publications were leaned on.

Lillie had fulfilled her aspirations.

She was at the centre of the worlds most fashionable society, dress designers flooded her with free outfits so that their designs would be seen on her, artists begged her for a sitting, poets waxed lyrical about her, Dukes and foreign Princes vied to be introduced to her and women wanted to be like her.

Lillie became referred to in society circles as the Langtry Phenomenon.