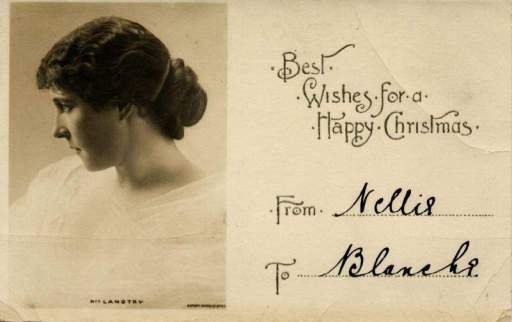 At last Lillie had achieved her ambition.

She was in London the hub of the world where she would undoubtedly blossom.

Soon after Lillies arrival in London her younger brother Reggie was killed in a riding accident. Lillie in mourning for her brother was invited to a reception by one her fathers friends the 7th Viscount Ranelagh at his home in Lownes Square.

She wore a simple black figure hugging dress which complemented her pale complexion. She was such a contrast the other ladies present, in their beautifully tailored and colourful evening gowns.

It was evident to all that here was a young woman of natural beauty. The distinguished gathering included a cross section of London's' society elite including many artists. Frank Miles and Everett Millais both asked if she would sit for them. The impatient Miles took out his sketch pad and made a line drawing of her so that he could capture the moment of her discovery.

Dinner guests were impressed not only by Lillies looks but her intelligent conversation outspoken views and wit.

Her days of verbal sparing with her brothers and her fathers insistence on a classical education, the usual reserve of young gentlemen, was a refreshing change. Within the week talk in London was of nothing else.

The Frank Miles drawing was outselling all the other postcards of society and stage beauties. Artists clamoured for her to sit for them.

Invitations to soirees, sporting events and parties arrived by the hour.