The Girl from Jersey 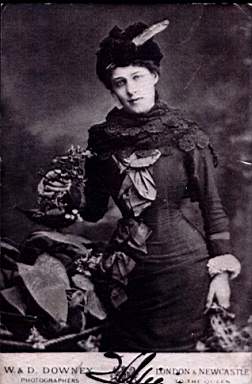 Lillie induced the same sort of hysteria as is today associated with the most famous film stars and pop stars.

The press, the gossips, the fans and her critics all waited to see what she was going to do next, they couldn't get enough of the girl from Jersey.

George Bernard Shaw said 'I resent Mrs Langtry, she has no right to be intelligent, daring and independent, as well as lovely'.

It is a frightening combination of attributes.

'Oscar Wilde in his flamboyant style said of her' I would rather have discovered Lillie Langtry than America.' He paraded the streets with bunches of Lillies proclaiming that he was going to meet the new Helen of Troy.

News of Lillie reached the long suffering Princess Alexandra with whom eventually Lillie developed a respectful and affectionate relationship.

On the insistence of the Prince Mrs Langtry was presented at court to his mother Queen Victoria. Lillies mischievous humour was evident as she wore a head dress of three huge white ostrich feathers in her hair (The Prince of Wales own emblem).

It was not reported whether Victoria was amused or not, but she personally removed a picture of Lillie from above the bed her youngest son Prince Leopold.

There's a lovely lady in a plain black gown
She isn't very rich, but she's taken all the town
London Society has gone quite silly
Fallen at the feet of the Jersey Lillie

Her profile is certainly Praxetelean;
She makes other Beauties look plain, or plebeian
And readers of fiction observe with surprise
A real live lady with violet eyes.