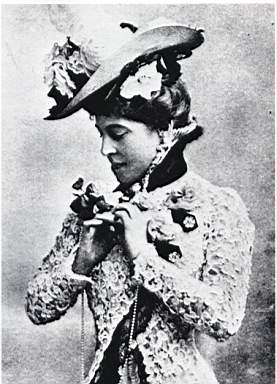 Spurred on by her success in England Lillie announced that her company were to tour the United States, she managed her own theatre company.

She arrived in America in the middle of the night and it appeared that the whole of New York (including Oscar Wilde already touring the states) was there to greet her.

Her first night was a sell out with boxes being auctioned for charity for hundreds of dollars. Disaster struck when the playhouse burnt down leaving only the name Lillie Langtry suspended above the charred remains. Newspapers throughout America covered the story. Undaunted the performance was moved to another theatre.

She played to full houses and was accorded unprecedented attention wherever she went.

Lillie tried hard to become a more accomplished actress and won over many of her harshest critics.